Field Trip: Recultivation of Hambuch open cast mine and Sophienhöhe 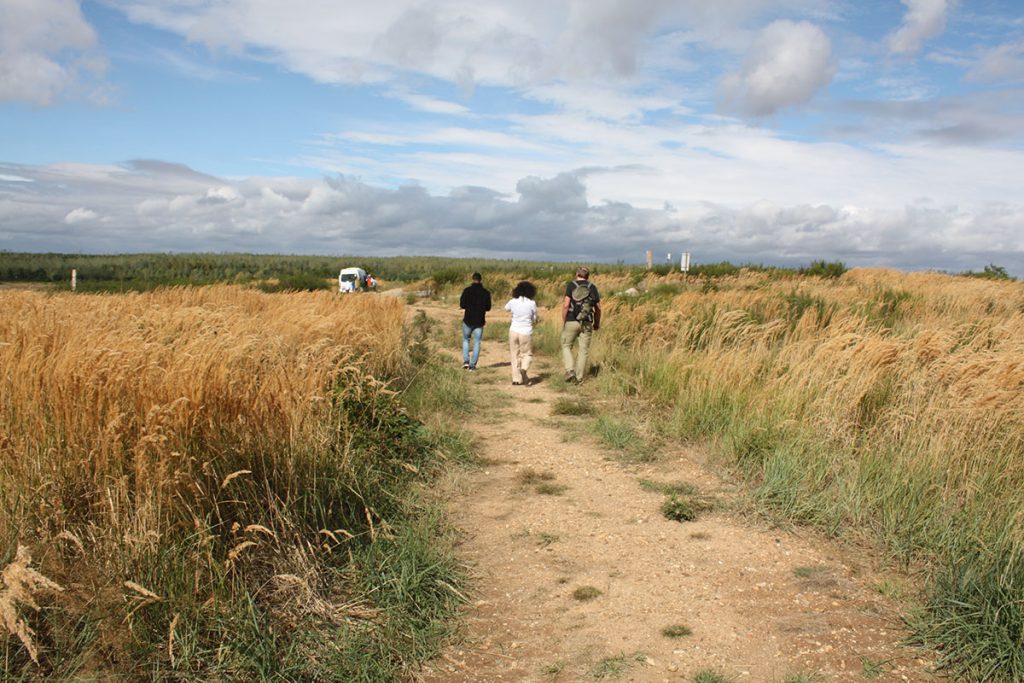 On one side of landscape in front of us was a huge open cast mine and on the other, a green meadow with fast growing plants waving in the breeze. It was surreal to do a 360 degree turn and switch from one extreme to the other.

But that’s the Sophienhöhe for you. It’s among the largest artificial hills in the world – created as part of regeneration effort around the Hambach mine – which produces 40 million tonnes of lignite (brown coal) yearly.

But what happens when you send a group of specialists focused on land restoration on a field trip to the Rhenish mining area in North Rhine-Westphalia in Germany?

After all, these individuals with world-renowned expertise in forestry, planning, business, design, community engagement and more had been brought together to look at how the world can take more notice of the very notion of land and what can be done to repair degraded natural environments.

Of course mining, by its very nature, involves paring back the earth to extract products so that they can be made use of in the global trade supply chain and more.

But this was an opportunity to hear from a representative of RWE, a multinational energy company which has faced controversy over its coal mines and has been the target of climate activists, about what it was doing with biodiversity and its approach to the land in this Rhenish Lignite mining area.

Our coach arrived at the very beautifully preserved, although rather quiet, Schloss Paffendorf where the RWE Recultivation Research Centre is housed. We spotted a nutria (a coypu) grooming itself in the moat of the 16th century castle complex and some ducks swimming along in the water as we walked into the site which boasted a 19th century neo-gothic appearance.

We heard from RWE’s Melanie Gutmann how the research centre is at the interface between science, mining and nature conservation and how the term recultivation was important when it came to understanding what RWE was doing with open cast mining sites. Recultivation is about growth after raw materials have been extracted from the original landscape. For RWE, Ms Gutmann clarified: “The word recultivation is mainly used in reference to the Rhenish lignite mining area. Here, the restored landscape after open-cast mining is primarily used again as a cultural landscape for agriculture and forestry, but special importance is also attached to nature conservation.” 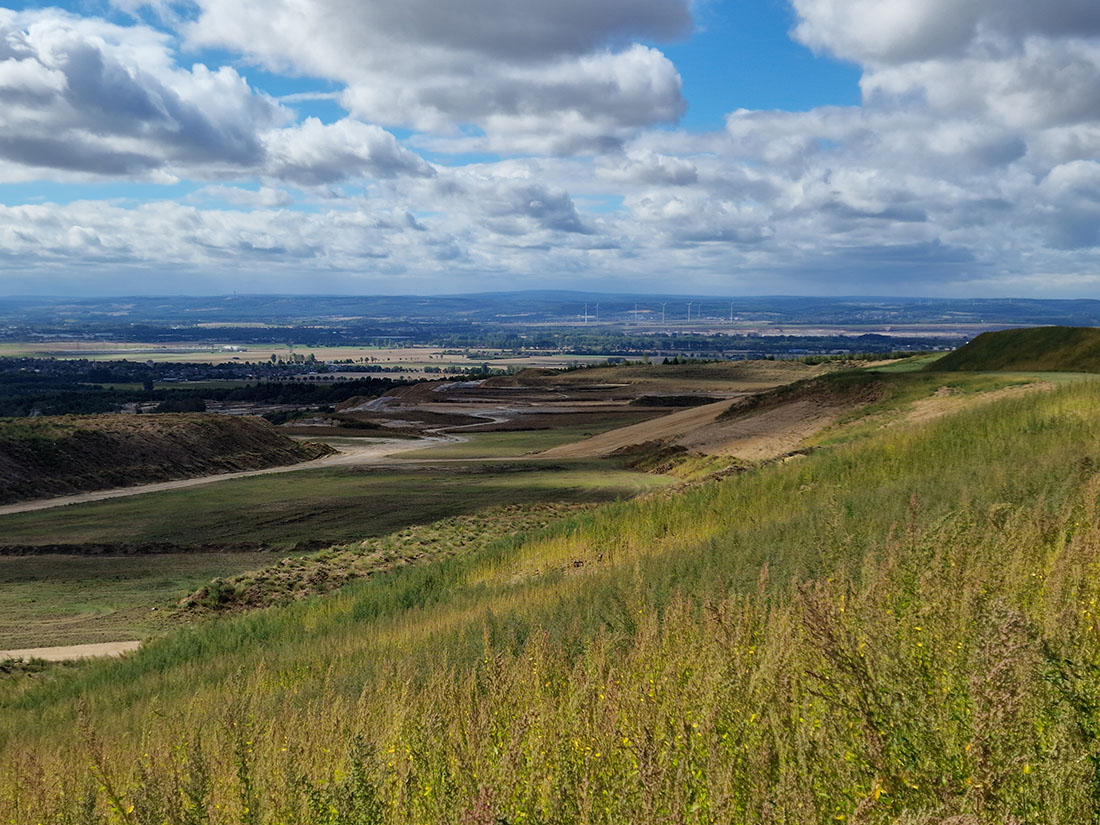 Those in the audience heard about how recultivation is considered before excavators carve up mining sites and how the land use both in the past and considerations for the future are heavily discussed. When the mining actually happens, there is an integrated process which takes unconsolidated sediments which are then transported by the conveyor belts towards the area of land where recultivation is the primary focus. These sediments are then used to refill the land. Consequently, we are told that ‘new recultivation landscapes are constantly being created in parallel with coal extraction’.

Projects like these are under continuous monitoring. Agriculture, reforestation and special habitats, including water ways are all factored in and there was surprise when we heard about the process to transport and transplant creatures safely – including the little red forest ants. Apparently, it’s not so easy to move bats though due to their understandable desire to return to their home locations.

We moved out of the classroom and visited the location we’d been talking about. We drove our bus to the site but it’s important to make clear that while the recultivated Sophienhöhe has over 120km of hiking trails, cycle paths and riding trails open to the public, cars are not allowed to access the Sophienhöhe. Conversations are underway about a possible information centre in the area in the future though by default, that would mean an expectation of increased footfall. The Hambach mine will remain as an operating site until 2030. After that Ms Guttman said production is to be shut down but recultivation would continue until the end of the century.

It was a windy day but the group of international experts explored the site. It was surreal to see the grazed land of a working open cast mine from the top of a hillpoint with plants coming up to your knees. We heard about the biodiversity focus and the species of trees that were being planted – seeds were being collected from forests in the region and used in the recultivation process. The meadow we were walking through had been created using a special haymaking process and while we didn’t see any more animals in person, we heard how creatures were being spotted. 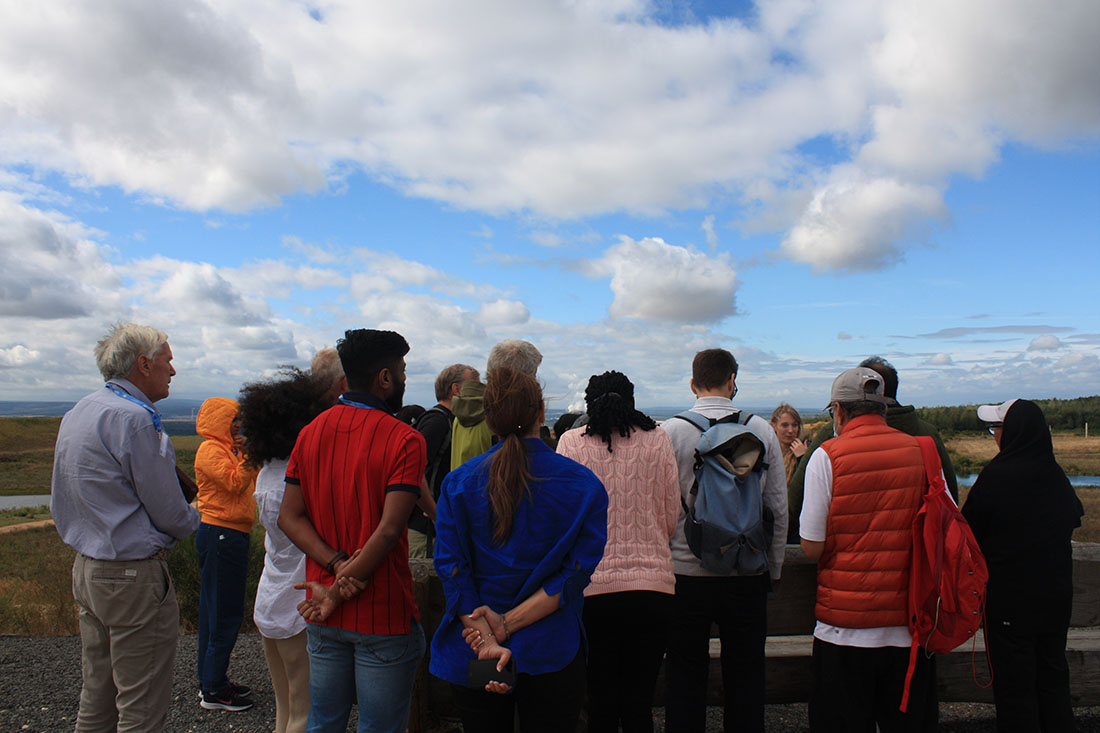 But what was the reaction from those on the field trip? It varied. Professor Iyenemi Ibimina Kakulu, a land management specialist, was interested in hearing about the collaboration between the different agencies that had been involved before the mining had been approved.

For others, including communications specialist Antonia Mendes, it was the greenness of the area that was striking and this possibility of rehabilitating an area after mining had taken place that stood out.

But Professor Olof Linden, Professor Emeritus at the World Maritime University, pointed out that opencast mining is an “environmental catastrophe” and that the original ecological system that existed would have been “totally eliminated”.

He added: “Originally (before the mining started) there were probably forests and agricultural land here. Some of these areas (probably all) were ‘artificial’, meaning they had already been transformed by humans. However, the decision was taken to scrape off the topsoil and start digging into the ground for the coal. There was much talk about how they saved the topsoil for the rehabilitation phase.

“I wonder how much of the original microflora and fauna as well as organic matter, nutrients and other elements are left when the topsoil is put back several years, maybe decades later – probably very little if anything. Then, during the rehabilitation phase, we saw planted trees and bushes but it is likely to take decades for a rich soil and a more complex ecosystem to develop,” he said.

The group also discussed the lakes planned and how they would be maintained, especially when it came to future proofing. And of course, the economic viability of these sorts of projects and who the stakeholders were when it came to a project like this also generated further conversations.

There were questions over residents and how much engagement they were able to have in a nature project like this, while UNCCD policy officer Salma AlSayyad said: “This trip allowed me to see first-hand that my personal consumption (raw material needed to support my consumption, batteries, energy etc) comes from somewhere real…”

One thing that was made clear though was that land restoration is not a simple concept and involves a significant amount of dialogue and thought at every step of the process.